People ask why we are doing this, for my part anyway part of the reason I came to Ireland was as a Bristol based Graphic Designer I was becoming less and less comfortable with the way my industry was promoting and in turn propagating mass consumption and Western consumerism.  I wanted a change, I was fortunate enough to be at the forefront of the beginning of Mountain Biking in the UK in the mid 80’s. I was one of the first Cross Country champions and went onto work in the industry for a couple of years. 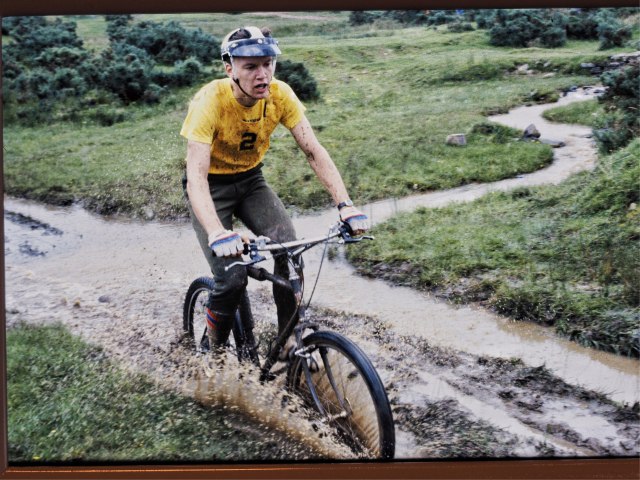 Me in the final race of the 1985 Fat Tyre 5 series which I was joint winner of.

Cycling bought me to Ireland annually as I helped out on a charity bike ride from Cork to Kerry run my friends company Bike Events. I had seen this fantastic landscape and thought it would be ideal for Mountain Biking and Trail Centres the like of which were beginning to spring up in the UK. Prior to leaving the UK I sent a proposal into Fáilte Ireland to recce the country for possible Trail Centre locations, once I had moved here in 1999 I met with the Cycling and Walking officer and in the second meeting the head of recreation at the state forestry company Coillté Bill Murphy, Bill was interested enough to take a trip to Wales where he visited trail centres and came back quite enthusiastic about the idea. We looked at 3 sites here the 3rd of which had great potential but Bill informed me that nothing could be developed there for 2 or 3 years due to logging patterns. This was disappointing and meant I had to boot the Mac back up and go back to Graphic Design.

However my environmental awareness grew and led me to become involved in education and awareness around sustainability and building community resilience mainly in West Cork but also nationally at festivals etc. In the top picture I’m on a discussion panel with Fergal Smith of Moy Hill Community Farm and Thomas O’Connor from Mana Organic Farm and Shop for Global Green at Electric Picnic.  I have also been involved with community eco tourism projects such as the Sheep’s Head Way and Cycle Route and advised on others including commercial projects.

When I found this beautiful piece of coastal land I could see the potential of bringing much of the experience and expertise I have built up over the years to a project that could benefit the environment and hopefully give us a modest living.

I truly believe that if we bring people to stay here at Goleen Harbour on the Wild Atlantic Way in luxurious contemporary accommodation involve them in where their food comes from through our gardens, get them out into nature through our learning activities and just give them a space to slow down and disconnect then they will leave with a greater understanding and love of the environment and it’s importance. We have the potential to create more change here than giving talks in town halls will ever bring about, now is the time.

This site uses Akismet to reduce spam. Learn how your comment data is processed.